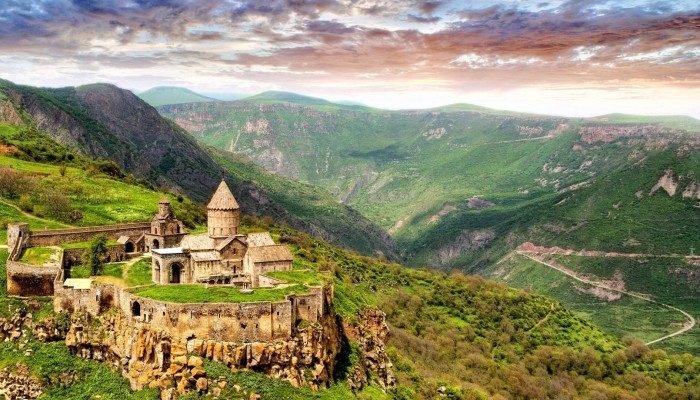 Tatev Monastery which is located in the South of Armenia at the center of Syunik region, called the “Pearl of Armenian architecture.” This monument of sacral architecture was built in the Middle Ages, on the right bank of the river Vorotan, not so far from the village of Tatev.

Today the monastery is removed from Yerevan on 315 km, and from the town of Goris in the – 30 km. it was built in the IX-XIII centuries. It was lit in honor of St. Eustache. This saint was a pupil of Thaddeus and was martyred for the peasantry.

The beginning of the monastic complex was a small church, built in the ninth century. At that time there lived only a few monks. To the middle of XV centuries there was a Tatev University that became one of the most important centers of science and philosophy. At various times, it was headed by Tatevatsi and Vorotnetsi.

The main building of the monastery is the church of St. Poghos Petros that was built by Hovhannes in 895-906 year in the place of the old church. The relics of the Apostle. Poghos and Petros which people got from its walls, were placed in the walls of the new church.

The main attraction of the monastery is the swinging column Gavazan. Stone column which is 8 meters high decorated with khachkar able to tilt independently and return to its position back.
Sacred buildings are surrounded by offices and living quarters, a bell tower, vaulted dining room with kitchen, pantry and rectory rest, built in the XVII-XVIII centuries.

Are you exited about the Armenian history? we are ready to help you with the excursion to the Tatev monastery organizing a special tour for you!  Detailed about booking