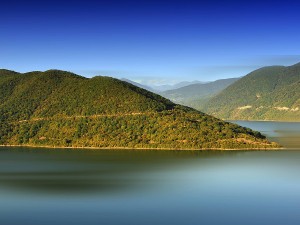 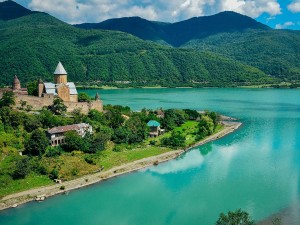 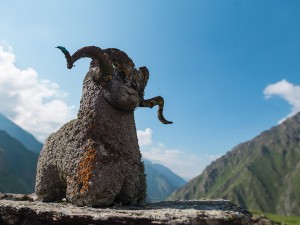 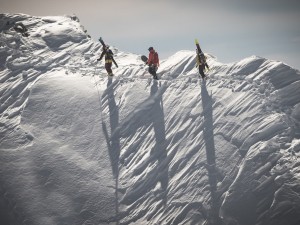 The Kazbegi National Park is situated on the northern slopes of the mighty Caucasus region and covers a total of more than 8,700 hectares of protected area. The Kazbegi or Mkinvartsveri Mountain is the third highest mountain in Georgia at 5.047 meters above sea level. It is surrounded by myths and religious traditions.
According to Greek mythology, the Titan Prometheus was chained to a mountain side in the Caucasus for all eternity as a punishment for teaching mankind how to make fire. According to Georgian stories, he was chained on the icy slopes of Kazbegi.
Kazbegi covers 135 square kilometers of glacier and is a great place for extreme sports enthusiasts.
Ananuri is a fortress on the foreland by the river Aragvi, not far from the water reservoir of Zhinvali and 70 km from Tbilisi. It was built by the Dukes of Aragv and dates back to the 13th century. The fortress is included on the UNESCO Tentative list.
Gudauri is Georgia’s best ski resort with well-developed infrastructure, the greatest difference in altitude and unlimited freeride, ski touring opportunities. The resort at an altitude of 2000 m is the highest settlement on the Georgian Military Road. The Gudauri season starts in early December and runs until the end of April.