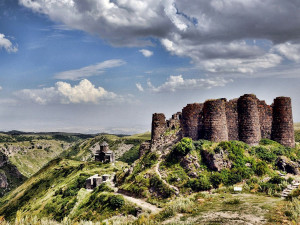 Do you want to see the virgin beauty of Armenian nature, breath the fresh air of Armenian mountains and feel the beauty of Armenian landscape? Then make your destination to Aragats! While Ararat is the symbol of Armenia mount Aragats is actually the highest mountain located in the Republic of Armenia (4090 m) and one of the highest among the other peaks of Armenian Highlands. At 3,190 m above the sea level you will visit Lake Kari (Stone Lake) which was mostly formed by ice and snow. While on the road stop to have a look at Armenian Alphabet Monument which is an interesting demonstration of the stone carvings of 39 Armenian letters that were invented in  405 and are still used to present Armenian language in the  written form. In the scope of this tour you will then visit fortress-castle Amberd which used to be one of the primary military-defensive points of the Armenian Kingdom.